Former Patel Conservatory student Shalyah Fearing Dreams It and Does It . . . Congratulations on Her Outstanding Performance on The Voice

The Straz Center believes in the vital power of the performing arts to nurture the human spirit. Anyone should be able to cultivate her or his creative gifts and curiosities starting at a young age, regardless of financial situation. So, we have a lot of scholarship money for performing arts training for young people, an open channel of support used by Shalyah and many others to get the classes, teachers and performing opportunities they needed to pursue their dreams. If you are a young person reading this blog or you are a parent of a young person with a desire to pursue acting, dancing or music, please apply for a Patel Conservatory scholarship. We will support you. 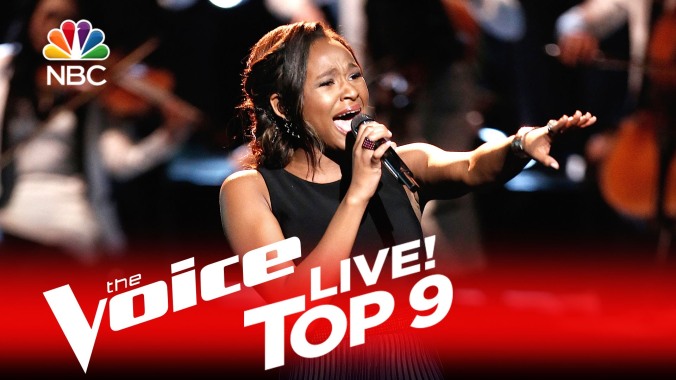 In Disney’s The Little Mermaid—while Ariel captivates and musical crab Sebastian gets the best song—the uncontested scene-stealing force in the story remains the detestable sea witch Ursula. It’s a plum villain role for any musical theater actor: a big role for a big voice.

It comes as no surprise that when the Patel Conservatory produced a student version of the show, 12-year-old vocal powerhouse Shalyah Fearing landed the part. Shalyah is, in reality, humble, funny, down-to-earth and not at all like the jealous, conniving undersea queen she nailed throughout the run of the show. However, Shalyah, like Ursula, possesses a magical voice. But with Shalyah, it’s for keeps.

In Shalyah’s last performance in a Patel Conservatory production, she played Dragon in Shrek the Musical, another role requiring a tremendous voice to fill the wings of a tremendous creature.

Shalyah as Dragon in Shrek The Musical, 2015. (Photo: Soho Images)

Then, it was off to audition for The Voice when she turned 15 and finally met the age requirement.

In a matter of seconds, Christina Aguilera nabbed Shalyah in the blind auditions: America met the young singer for the first time. Since then, we followed Shalyah’s exciting journey on the show to her last performance, a knockout rendition of “A Change is Gonna Come.” She proved this Fearing is fearless as she climbed to the Top 9 before being eliminated in last night’s semi-final results show. A few weeks ago, she returned to the Patel Conservatory for the “Broadway or Bust” class to talk about her experience on The Voice.  We loved having her back during a short break from her hectic schedule.

“It was so cool to see her again after all this success,” says cohort Abby Pfingsten, who starred opposite of Shalyah in A Little Princess and also trains at the Patel Conservatory on scholarship. “The show hasn’t changed her. She’s still funny, still down-to-earth, still one of us. We all hope she wins.”

In fact, we all did. Shalyah has one giant fan club at The Straz, from the admin offices to the rehearsal studios at the conservatory. We champion her and know, regardless of last night’s outcome, Shaylah slays. We have seen her vision, her discipline, her level of self-sacrifice and commitment to her performing arts development—Shalyah studied with many excellent teachers in this area from other schools—and we are thrilled that she chose to use our scholarship support to take classes, hone her craft and create a performing arts family here.

Shalyah with some former class and cast mates at her recent visit to the Patel Conservatory.

The bigger picture, for us, is about making sure the thousands of young people in and around the Tampa Bay area who know they have performing arts gifts or are curious about what it would be like to take a voice class, a TV acting workshop or attend summer dance camp have financial support to explore the performing arts.

“I would love for everyone to know,” says Vice President of Education and ongoing theater instructor and director Suzanne Livesay, “that they don’t have to let cost be a factor when it comes to performing arts training and education. Sometimes people let the idea that they can’t afford it get in the way of exploring the arts or developing skills they think or know they have. Many people don’t realize that the Straz Center has financial support available to help them try something new or pursue their dreams. Any student who has the desire to learn is eligible.”

The Straz Center awards over $275,000 annually in need and merit-based scholarships. “Students can receive scholarships for almost every one of our classes and camps,” Livesay says. “Much of the funding is based on need, but we also have funds available to students who attend our outreach schools and merit scholarships which we award to especially talented students.”

In 2013, the Patel Conservatory at the Straz Center chose Shalyah among several other students as representatives for our “Dream It, Do It” campaign. We are so proud of Shalyah for dreaming it and then doing it! (Photos: Rob/Harris, Inc.)

We will continue to cheer for Shalyah as her career moves on and do what we can for young people in the area who also would like to study and perform at the Patel Conservatory. Details and applications are available on our website. We recommend that everyone submit the need-based application so we know there is a need; from there, the scholarship committee reviews applications and offers awards. The deadline for next school year is July 16th.  If you have questions or would like more information, please contact patelconservatory@strazcenter.org.