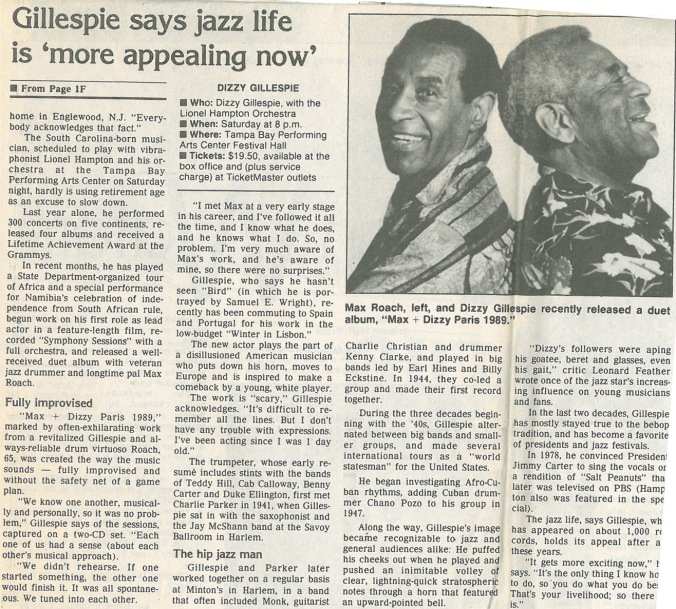 Two of the great, Mufasa-esque lions of be-bop era jazz conspired together for a performance on the stage at Morsani Hall on Saturday, April 7, 1990, and, surprisingly, it didn’t blow up.

However, one can only speculate about what happened to the minds of the audience.

Vibes virtuoso Lionel Hampton, with his Orchestra, hosted trumpeter par excellence John Birks Gillespie, best known as “Dizzy,” in a jazz concert for the record books. At the time, Dizzy was 72 years old, a Kennedy Center Honors recipient that year, and, three short years after his Straz Center engagement, would die an American legend in Englewood, New Jersey.

When Dizzy blew, his neck and face puffed like a set of billows, his eyes bugged and his signature up-turned-trumpet bell gave him his distinctive, original look. The beret, sharp goatee and dark spectacles helped.

Dizzy, in the scope of jazz, held a special place as a musician and African-American man who pushed himself to the limits of his imagination and then some, becoming a cultural ambassador, a beloved American icon and a superior improvisational artist. Plus, he was so darn funny. Who else could have convinced President Jimmy Carter, in 1978, to record the lyrics for a rendition of Gillespie’s own famed tune, “Salt Peanuts”?

In 1964, Gillespie put himself forth as an independent write-in candidate for the presidential race, citing his Cabinet, which would include Miles Davis as Director of the CIA and Charles Mingus as the Secretary of Peace. Phyllis Diller, he noted, would run on his ticket as VP.

If only we had a time machine.

Gillespie appeared on more than 1,000 records, and, in this one-night-only appearance, in the flesh on our stage with his good friend and equal legend, Lionel Hampton. Hampton also sported an impressive collection of honorary doctorates and would later earn the National Medal of Arts from President Clinton. Hampton died in New York City in 2002. He was 94 years old.

The show, billed as “Dizzy Gillespie with the Lionel Hampton Orchestra,” played at 8 p.m. with tickets at $19.50. Again: if only we had a time machine.