The Straz Center @ the Riverwalk offers a medley of interactive objects encouraging everybody to stop by and play with us.

Detail shot of Why Sit When You Can Play? musical bench created by The Urban Conga. Photo by Rob/Harris, Inc.

For 27-year-old architect Ryan Swanson, the moment of clarity came when he stood alongside his pop-up public art installment that included a 12-foot beach ball in downtown Tampa. A homeless man approached Ryan and his business partners for money.

“I said, ‘man, we don’t have any money, but you can play with our stuff.’ At the time, I was working for a firm, we’d all just graduated from the University of South Florida architecture school, and were doing these pop-up installations in our spare time because we were poor, trying to transform underutilized public spaces. We took the guy over to the beach ball, introduced him to the family who was playing with it, a middle-class family. Everybody was skeptical at first, then we left them to it. Next time I looked over, they were all like little kids, batting the ball to each other. I saw it: play breaks down barriers. It was just … people playing. I said to myself, I’ve got to designate more time for this.” 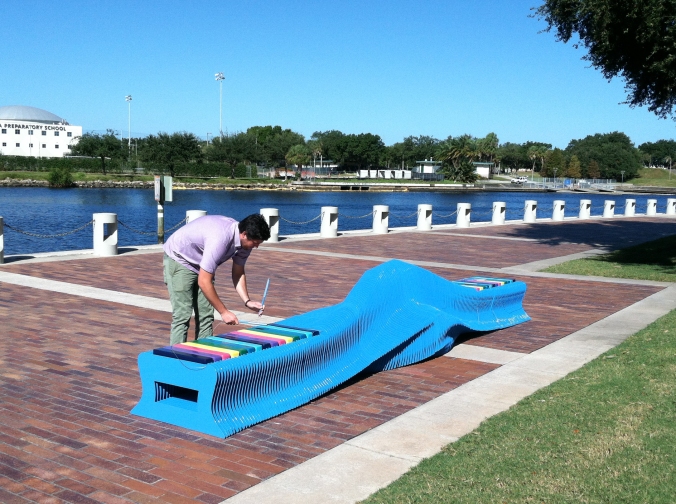 Ryan Swanson, of The Urban Conga, demonstrating how to play the musical bench.

Ryan quit his job and The Urban Conga, a creative collective determined to transform static public spaces into interactive play places, was born. The vision, started as Ryan’s graduate thesis at USF, resurrects the idea of public space as a locus for human interaction. People can participate in something cool together, as a community, the way we used to in the good old days before screen devices became our primary social partners. “It’s been a hurdle to convince the old guard around town that building a park in and of itself isn’t going to draw people to it. Look at Curtis Hixon Park, for example. It’s beautiful. But people really only go there when there’s an event, some draw. It’s hard for the older generation to understand we live and experience in a completely different way now, though they’re seeing our stuff work. As with our ping pong tables at Gaslight Park. People looked at them like they were alien spaceships, now people are bringing their own paddles out at lunch. So, it’s getting somewhat easier for people to understand the importance of our designs, of our philosophies and ideas that play works to bring people together, to make a conversation happen.”

Last year, Straz Center Director of Programming Chrissy Hall approached The Urban Conga about activating some space around the Straz Center. “We have this wonderful location on the Riverwalk, we’re here for our community, and we want to be a destination where people come hang out, even if they’re not coming to see a show,” she said. “The Urban Conga has the right thinking we need to help make The Straz a place where people participate in our campus – a place where they can play and enjoy themselves.”

Kids playing the musical bench at our Open House event.

After hours designing, welding, carving and revising, The Urban Conga installed Why Sit When You Can Play?, a bright-blue xylophone bench on the Riverwalk. Six steel segments comprise the 1.5 ton structure, a permanent installation, although the multi-colored sound blocks are made of hardwood maple and loosely affixed to give the blocks reverb to transmit sound. Anyone can sit and enjoy the bench. Or, pick up a mallet and give it a whack.

“We were so excited The Straz was open to us and our ideas for the musical bench. It’s a great feeling to come down here and see people playing it, or sitting together and talking while strangers walk up and start hitting it. It’s about musical collaboration, conversation … but all our work is a constant experiment to see how people engage,” said Ryan.

The success of Why Sit When You Can Play? prompted Chrissy to invite The Urban Conga, a trio that includes Mark Perrett and Brennen Huller as well as Ryan, to construct The Cube, an interactive, community graffiti-art project that happened at The Straz this winter.

Local artist Angel Corela was the first to paint The Cube on January 20, 2016.

After being up for only one day, our community had already left their mark on The Cube!

“The Cube was fantastic,” Chrissy says. “We are in such an exciting time of change for The Straz as we make these huge efforts to offer easy ways for the public to feel a sense of pride and ownership in their performing arts center. We’re seeing the mission of the Straz Center in action, responding to social evolution. The role we’ll take in the future of this community is shaping itself before our eyes.”

Local artist Cory Robinson paints another layer on The Cube on February 18, 2016. 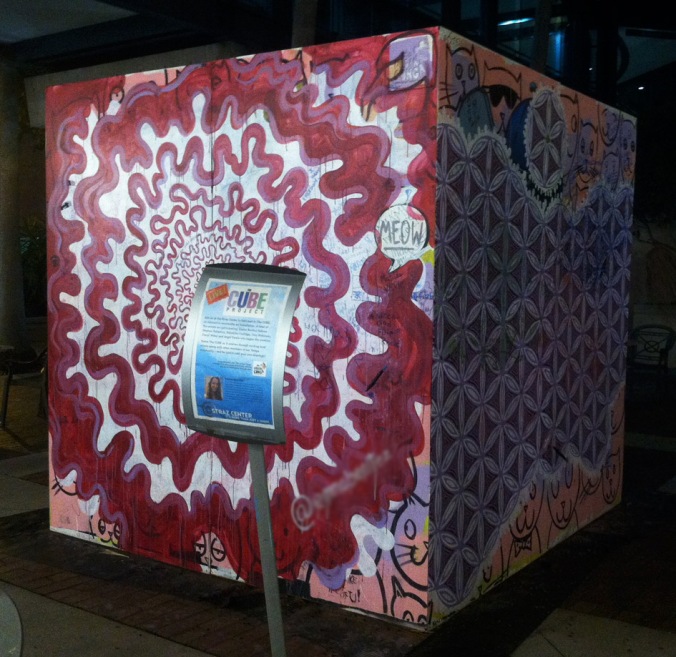 The Cube has moved to different locations around our campus. Here it is in the courtyard outside of the Jaeb Theater on April 16, 2016.

The next interactive exhibit hits the Riverwalk at The Straz April 30 and May 1 when Australia’s kid-centric imaginarium-makers Polyglot Theatre stage We Built This City, a free, family-friendly event featuring thousands of cardboard boxes that can be used to build any sort of cityscape participants desire.

With rocking music from an on-site DJ to fire the imagination and offer some creative hype, children of all ages can design, build, tear down, walk through and play in a city of their own making. The only rule is to have fun. Polyglot’s team will be in the mix guiding participants, acting as construction workers and hilarious characters and setting the tasks to bring people together.

Fin Harp – Los Angeles-based performing art collective String Theory provided that dolphin-inspired Fin Harp that attaches to the roof of Morsani Hall. It was designed and built by Luke Rothschild. Read more about this permanent installation in this blog article.

Who We Are: Faces of Tampa Bay – French-American photographer Daniel Chauche spent two weeks in residency photographing portraits of the Tampa Bay area community from all walks of life. The photographs are on display through May 2016 along the Tampa Riverwalk. Read more about this free, outdoor exhibit on our website.