James Corden stars in the next filmed theater performance from National Theatre Live, One Man, Two Guvnors. We think this is a fine time to mention our favorite bits from his hilarious skit on The Late Late Show. 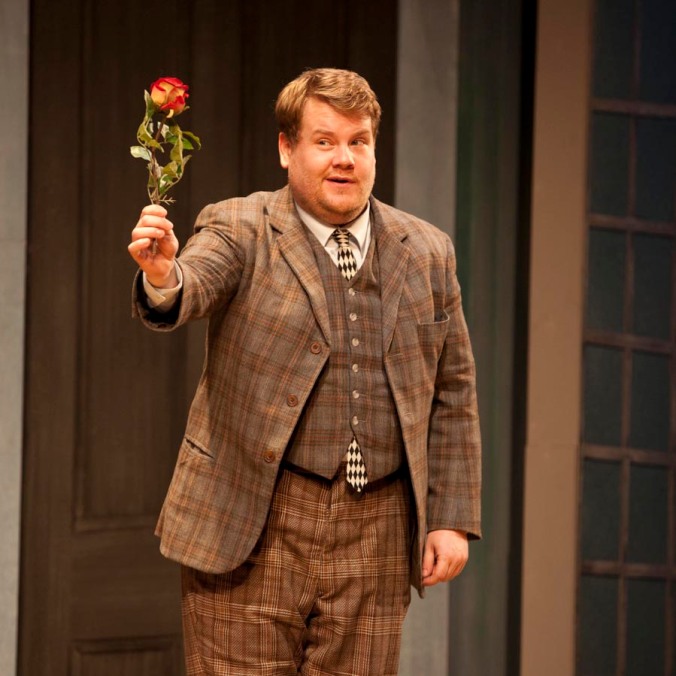 James Corden in One Man, Two Guvnors, for which he won the 2012 Tony Award for Best Actor in a Play.

The awkward Britney Spears one. The somehow-they’re-wrestling-on-a-stranger’s-lawn Red Hot Chili Peppers one. The LOL and then cry when Stevie Wonder calls his wife one. Oh! And the FLOTUS hand-dancing to Bey one or the road tripping to the Super Bowl with Chris Martin one. We give up. Just pick one. They’re all hysterical. Of course, we’re talking about James Corden and “Carpool Karaoke.”

James Corden struck gold when he managed to launch the now cult comedy skit on his late night talk show, The Late Late Show, which he took over when Craig Ferguson left in 2014. The first episode of “Carpool Karaoke” aired in 2015 when Corden asked a “friend” to help him get through traffic to work and the go-pro pans to Mariah Carey. [*wild audience applause* team-singing to “Always Be My Baby” ensues.] 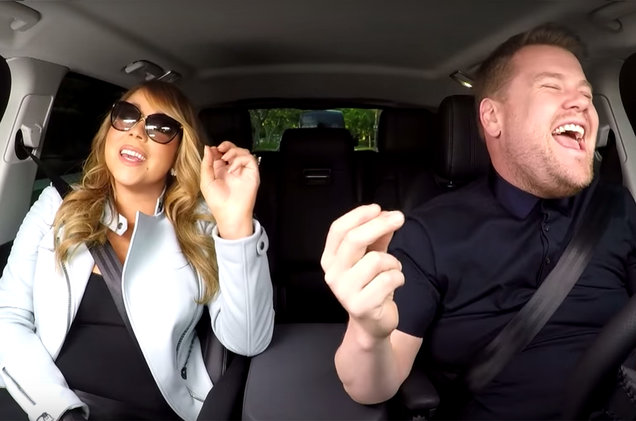 Mariah Carey helping James Corden get to work in the first episode of “Carpool Karaoke.”

The formula has more or less been the same, whether the passengers are One Direction, Gwen Stefani or Lada Gaga: Corden in an SUV, needs company driving somewhere, famous person gets in car, they sing together. They may pick up friends (like George Clooney and Julia Roberts for Gwen Stefani’s “Hollaback Girl”) or stop to play dress-ups (Justin Bieber) or, as mentioned, pull over to the curb for some “good man grappling” on a Los Angeles lawn (Anthony Kiedis won).

Most Americans don’t realize that James Corden, this lovable fanboy host, was a gigantic theater and television star in Britain before crossing the pond to headline the vamp-hours CBS talk show. Despite his recent Rolling Stone cover and Tony® Award for One Man, Two Guvnors, Corden continues to find himself pigeon-holed by Yanks as a talk show host although he spent several years hounded by British paparazzi for his fame as the character “Smithy” on the sitcom Gavin & Stacey.

We admit, we love him most for “Carpool Karaoke,” too (we are looking forward to the upcoming skit with Madonna almost as much as we looked forward to Lin Manuel-Miranda on Drunk History). In honor of Corden returning to his more auspicious comedy roots when he stars in the filmed version of National Theatre’s One Man, Two Guvnors, we asked some of our dedicated Straz Center staff to reveal some of their favorite “Carpool Karaoke” moments.

“My absolute favorite was Adele. When he called her and said “Hello, it’s me . . . I was wondering if after all this time you’d like to meet” and then she comes and gets in the car. I also loved when he advised her she could have a better squad than Taylor Swift with Beyonce, Jennifer Lawrence and Emma Stone. He also got her to rap the Nikki Minaj “Monster” song which was classic!”—Jeanne Piazza, programming manager

“My favorite is when he had JLo (Jennifer Lopez) on his show . . . not that I’m a fan of hers, but because he asked her who was the most famous person in her phone and then she allowed him to send a text to my boy, Leonardo DiCaprio. The end result is totally hilarious and adorable.”—Amber Russell, ticket office supervisor

“My favorite moment was with Jennifer Hudson when she ordered the cheeseburger in the drive thru line for James Corden.”—Nicole Pockrus, production coordinator, education

And, of course, the “Broadway” one was a huge hit.

“Love the Broadway one, for obvious reasons. Growing up in NY as a professional actor, it captures exactly what I love most about being part of the Broadway/Theater community. Plus, it makes me miss NYC.”—Bill Rolon, corporate relations manager

“It’s the most amazing one ever. ‘One Day More’ at the end . . . Audra McDonald for the WIN! They are the perfect ensemble in this. You couldn’t have staged it better.”—Dr. Lauren Murray, music department chair, education