We carol. We wassail. Well, we used to wassail; but, we still carol about wassailing. Why? And what is a wassail, anyway?

The performing arts are such an integral part of the holiday season that we hardly even remark about how much this time of year we spend going to shows, singing with family, performing in church, singing in temple and holding community Kwaanza song and dance events. Singing, dancing and acting go hand-in-hand with this season.

One holiday performing art form that goes way back is caroling and its companion, wassailing. Interestingly, the whole shebang that we know as Christmas caroling started in medieval France and England with a court dance—the “carole.” The dancers would respond in a refrain to a song-leader’s verse, creating a call-and-response singing dance. Think “Deck the halls with boughs of holly”/”Fa la la la la …” and you get the picture. In time, dancing fell from the tradition, but roving bands of singers remained.

However, it’s worth noting that the whole shebang as history knows it started with the pagans dancing and singing around stone circles for the winter solstice, usually around Dec. 22nd-ish. These praise songs, also called “noels,” happened for the pagans for all the seasons, not just winter, although noels in winter survived with great notoriety. 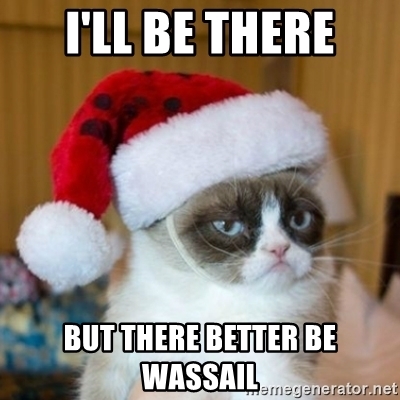 As Christianity took hold of the Western world, especially in Italy, nativity plays started around the winter solstice and used songs to deliver part of the storyline. The idea was that the audience would sing along, and the popularity of the nativity play spread throughout Europe, birthing many of the carols we know today. By the Victorian era, celebrants took to the streets to sing carols in public

Among the leaves so green, folks needed a toast. Because let’s face it; if you’re out in the cold singing, there’s a good chance somebody’s packing a toddy. In Old Norse, this toast was ves heil, and passed through Middle English as waes haeil, both meaning “be healthy” to wish someone well before a drink. The phrase morphed into wassail, eventually settling into a verb meaning “reveling with booze” though the connotation of wassailing is somewhat more elegant than, say, a similar thing happening at Gasparilla. Or maybe not … some historians point to the enthusiastic wassailing of the 17th century that led British and American Puritans to ban carols and, well, celebrating Christmas at all. Obviously, that went over like a lead sleigh.

We get eggnog from early wassail, the noun form, meaning “a spiced yuletide beverage for celebrating Christmas in particular.” Another cool, weird morph from the early wassailing days is what we know of as the Christmas bonus and tipping our supers, mailperson, and other people who provide services to us throughout the year. Back in the wassailing heyday, the drinking carolers and others in the serving class carried clay boxes; the wealthy were expected to share their bounty during Christmastide and so deposited money into these boxes. Ergo, “Boxing Day” evolved in Canada on Dec. 26 (the giving of Christmas boxes of money and such to workers) and our current practice of the Christmas bonus.

Though wassailing with traditional wassail has become almost obsolete in our modern holiday traditions, drunken singing of carols is alive in well in many homes and neighborhoods throughout the land. Elsewhere, celebrants in more reverent and wholesome practices still participate in caroling though that formal practice is fading as well. It seems that as humans change the way we live, we adapt our caroling and wassailing with us.

Love and joy come to you,
And to you your wassail, too.
This blog goes on holiday next week
but we’re sending you
a Happy New Year,
We send you a Happy New Year!