Let’s say one morning you hustle into your favorite coffee shop, order your regular, and as you’re dawdling by the pick-up counter, you happen to make eye contact with someone at the high-top in the corner who happened to look up the same time you did. An exchange occurs in that moment: you capture each other, an undeniable knowing that you are supposed to be together passes between you. You brave the unknown; you travel the 8,000 miles across the coffee shop to speak. A conversation leads to a date that leads to a long weekend where you wake up Tuesday to discover yourself in love.

You become that skipping, smiling, whistling, happy happy joy joy supernova of a besotted lump experiencing what it feels like to be the most favored in the universe. Nothing could throw a hitch in your skip.

But news arrives you didn’t expect – a diagnosis, a deployment, something that sets your time together against the clock. You found the love of your life, yes. But, you’ll only have one hundred days with that person.

Three and a half months.

How would you choose to live each and every one of those days? So goes the premise of Abigail and Shaun Bengson’s autobiographical punk-folk-indie-rock-electronica blues show, Hundred Days, which runs in the Jaeb Theater Jan. 15 – March 24. 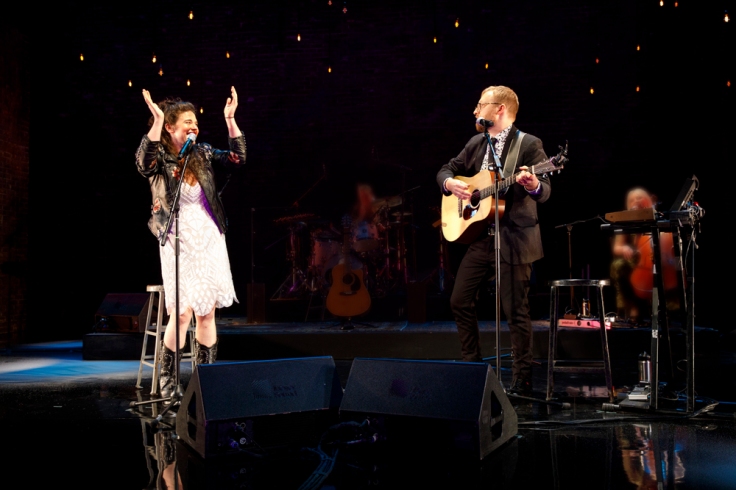 The show, which reveals their love-at-first-sight story and the crazy events that followed, does so through a rock concert structure, almost like a reverse musical.

Hundred Days is a concert that tells a story – a very personal, very extraordinary, very funny story about the make-or-break need to become vulnerable if you want to make love stay.

Professional singer-songwriters, the Bengsons wrote all the songs for show, pulling from their favorite theatrical forms to get Hundred Days exactly where they wanted it to be: leaving audiences wishing the show itself lasted at least as long. The show has been a huge hit in New York and San Diego, where it ran before the Bengsons packed up their guitars and drums and headed to Tampa.

Our INSIDE magazine caught up with Abigail and Shaun during their opening weekend at La Jolla Playhouse in San Diego to talk about Hundred Days, family life and their upcoming Florida debut at The Straz.

INSIDE MAGAZINE: Tell us a little bit about this show. It’s a departure from the traditional musicals we normally have at The Straz and it’s not a jukebox musical or a concert. What is it?

ABIGAIL AND SHAUN: It’s true that Hundred Days is not your standard musical theater fare. We started out as musicians and moved into the world of writing for theater because of our passion for telling stories and the ability theater has to bring people together for big moments of shared emotional catharsis. So, our music pulls from a wide variety of genres that inspire us, like folk, punk, indie rock, blues and electronica. We also pull from a lot of different theatrical styles when it comes to building the structure and form for the stories we want to tell, including folklore storytelling, documentary, concert and stand-up comedy. Our core collaborators Sarah Gancher, Anne Kauffman and Sonya Tayeh have also been hugely instrumental in creating this new, music-theater hybrid. They helped us push the form and the sound as well as weaving in more traditional theatricality throughout our work. And really, the truth is, even with all of the ways in which we are trying to break the mold, at its core, Hundred Days is a story told through music just like any other piece of musical theater! It’s all in the service of building an emotionally compelling story that we hope will resonate with our audiences.

IM: How “true“ is the “based on a true story” part of Hundred Days?

A&S: It is embarrassingly true! We really did have our first date, then three weeks later, we were hitched. Something about the moment of our falling for each other shattered any illusions of youthful invulnerability we had, made us realize the pain of placing so much of our hearts into such a fragile vessel. Some details and events are changed in the show in order to fit it all into 90 minutes, but any change that we made was designed so that the show would better convey what it felt like to go through that time – the joys and the terrors that we felt. There is a scene in the show that is an actual transcription of a conversation we had. It’s in there in all its glory and its humiliation.

IM: You all spend a lot of time together. What’s your secret to staying a happy, healthy and productive family?

A&S: Yes, we do spend a whole lot of time together. We’ve actually really worked for many years to be able to build a life in which we could be together as much as we can possibly be. It is truly the blessing and the joy of life that we get to. This is the exact opposite of how we’ve handled pretty much every other relationship in our lives. We’re both huge introverts and usually need a great deal of personal space. But, it’s just not like that with each other. There is certainly a lot that we needed to figure out in terms of combining and balancing family and work and it’s a daily practice to try and get it right. Finding that balance has become even more true since the birth of our son two years ago. We really thought we were already operating at full capacity, but, man, we can’t believe how many plates we have to spin at once trying to keep the art going and raise our boy in a way we feel good about. If there is any secret at all, it’s being as open and honest with each other as we can, trying always to talk things through, really working to try and hear and support each other. That can be easier said than done, but it really does come down to that for us.

IM: Share some of your musical influences and mentors … how do you create the Bengson “sound“ in this show?

A&S: We grew up listening to all sorts of music and we hope that it comes through when you listen to our tunes. We’ve been writing this show for more than a decade, and you can hear a lot of the different styles of music that we’ve been writing and listening to from over that time. The core of our music is really all about folk, both American folk music as well as from places all over. We grew up listening to a lot of ‘60’s folkies like Joni Mitchell, Paul Simon, Odetta and Ewan MacColl. There’s a lot of music being made right now that inspires us a lot too that draws on that folk tradition – Sufjan Stevens, Joanna Newsom, Sharon Van Etten. We also really love it when that folk sound meets punk music (The Pogues, Gogol Bordello, Flogging Molly). We are also huge fans of big vocalists and singers from Motown, soul, and Latin music like Etta James, Aretha Franklin and Caetano Veloso. The newest elements that we have loved playing with is using big heavy electronic beats and playing with interesting electronic sounds and textures like The Flaming Lips, Björk, Kanye, James Blake. Everyone onstage in Hundred Days plays an instrument and sings, so this blend of acoustic and electronic elements with a big choral sound is what this show is about for us.

IM: Hundred Days is the kind of show that really touches the heart. Do you often have audience members sharing stories with you? Would you mind sharing one or two touching moments you’ve had with fans?

A&S: We have heard a lot of sweet stories from people! Our favorite thing is getting to hear stories from both the brand-new young couples in the house as well as from couples who have been together 50-60 years. There was one older couple in their 80s who were sitting beside our associate director, Caitlin Sullivan, and she couldn’t honestly tell what they were thinking about the show. But, as they were leaving, she heard the woman say, “That is exactly what it felt like to be young and in love. That is just what I remember.” That really meant a lot to us.

IM: What do you hope audiences will get out of this show?

A&S: In many ways, these are frightening and confusing times we are living through. We find that it’s easy to get beaten down, to numb yourself out, to give up. This show is about the power of fear and the ease with which it can prevent us from living. This show is our way of continuing to challenge ourselves to love and to live and to not give in even when the stakes feel insurmountable. And also – we hope everyone will enjoy the awesome music and hilarious jokes.

A Note to Fans from Abigail and Shaun:
If anyone is curious to hear the music before the show, we just released the official cast album. You can find it on iTunes, Spotify, wherever you go for your music. We worked hard on it, and we are proud to get it out there and share it with folks. We are so honored to get to be coming to Tampa, to be welcomed into this theater and this community. We are looking forward to meeting all of you!