An Ivy League tradition shed the shackles of the patriarchy, gaining a glorious new talent with Sofia Campoamor. 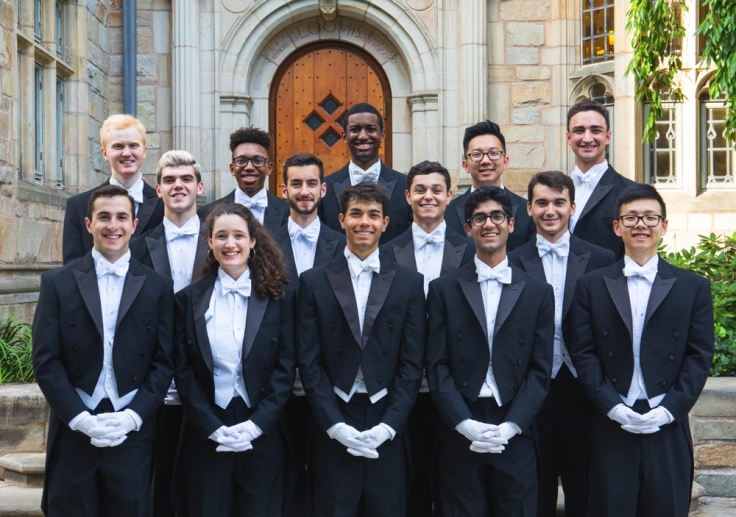 Yale University’s formerly all-male a cappella group The Whiffenpoofs began in a delightfully Victorian upper-crust circumstance involving a local tavern, a freezing New England evening and a handful of Glee Club members with access to beer.

The story goes that roughly a century ago, some Yale upperclassmen who happened to be in the Varsity Quartet ducked into Mory’s Temple Bar to escape the bitter New Haven cold. Needing very little liquid encouragement, the young men began singing and harmonizing, charming the barkeep and fellow patrons. The young men began meeting each week, gained a following and formed an a cappella group featuring the best singers Yale had to offer. Needing a name, quintet member Denton “Goat” Fowler suggested a mythical dragonfish from a common joke called a Whiffenpoof. Capturing the levity they wanted, “Whiffenpoof” stuck. In 1909, Yale University’s The Whiffenpoofs were born, staying the country’s oldest all-male a cappella group until 2018, when the Whiffs voted to open the group to Yale’s best singers, whoever they may be. (The university’s all-female group, Whim ‘N Rhythm made a similar vote.)

Composer and soprano Sofia Campoamor auditioned, landing a Tenor 1 spot and securing her place in Yale history as the first woman to don a Whiff tuxedo. Although assigned soprano parts, Campoamor’s range plummets to alto and bass when necessary or vaults to operatic head voice for higher soprano notes. In an article for Yale News, her singing peer Aissa Guidno quipped that Campoamor’s exceptional range “doesn’t really exist.”

Campoamor auditioned for The Whiffenpoofs with Sara Bareilles’s “Manhattan,” a popular tune that displays both a vocal and emotional range for a skilled singer who can capture very nuanced phrasing, pulling something a little extra out of the end notes. Campoamor impressed the judges, and now she joins the top tier of Yale singers as The Whiffs embark on their 2019 tour. 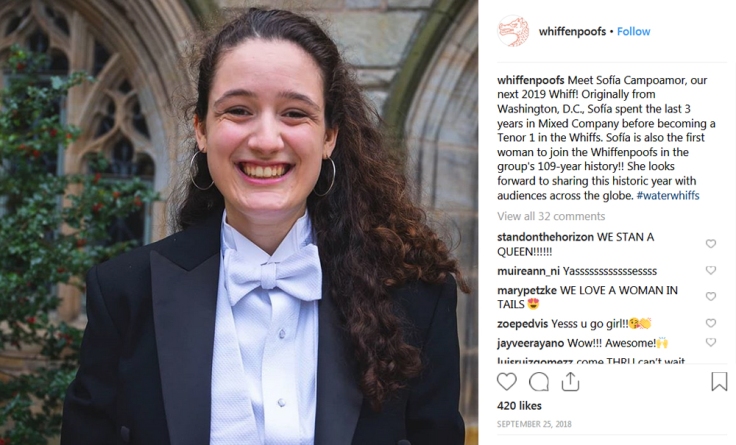 Whiffs go on national tour after their junior years, taking a leave of absence from their studies. They return to Yale at the end of the tour to start their senior years. So, each year, a new class of Whiffenpoofs charm the nation with their tradition of robust singing and wacky harmonizing. The Whiff class of 2019 arrives at The Straz Wed., March 27, to perform in Ferguson Hall.

While Whiffs ’19 may be the first co-ed class, efforts were made 30 years ago to lift the gender restriction as members realized they were withholding their resources and privileges from qualified singers. In 1987, Whiffenpoof David Code lobbied to open the group to women, a position that polarized the campus and sparked a debate that grew, as Code reported in The New York Times, “ugly and personal.” Yale itself went co-ed in 1968, the year Code cites as being the year The Whiffs should have also started auditioning qualified female singers. “Finally … meritocracy is here,” he told The Times. “I’m thrilled. I’m delighted.”

Sofia’s inclusion doesn’t strike the current make-up of Whiffs as political. “If people judge Sofia on her quality as a singer, they would reach the same conclusions that we have,” says current Whiffenpoof musical director Kenyon Duncan. “This class of Whiffenpoofs is exceptionally talented.”

Get your tickets now before Poof! they’re gone.