Everybody just have a good time.

Next week, the Berry Gordy bio MOTOWN THE MUSICAL returns by popular demand to Morsani Hall. The musical tracks through Gordy’s journey as the star-making superpower of the Detroit “Motown” sound. His stint as the emperor of Hitsville, U.S.A. launched the artists who shaped American pop music: The Temptations, Diana Ross & The Supremes, Smokey Robinson & The Miracles, The Four Tops, Marvin Gaye, Stevie Wonder, Michael Jackson, The Jackson 5, Martha & The Vandellas, The Commodores, Lionel Richie and more.

But what about the more human side of the legend? Surely he has quirks and surprising factoids about his life, right?

In 1938, Gordy—like 70 million other people—listened to “The Fight of the Century,” a two-minute slugfest between American hero Joe Louis and Nazi darling Max Schmeling*. Louis, who was born in Alabama but lived in Detroit, bargained for this rematch because Schmeling had knocked out Louis in an unprecedented upset in 1936. Schmeling’s defeat of Louis foreboded the rising Nazi power and plunged African-Americans, who were terrorized by rising violence of the KKK, into despair. The fight was way more than a boxing match: it was a national portent of the fate of our nation.

So, you can imagine what kind of effect a Joe Louis K.O. win in the first round would have on a boy listening to the match. On the radio. In Detroit.

Berry Gordy became a boxer. (The song “Hey Joe” from the musical came from this moment in Gordy’s life.)

In 1948, Berry Gordy appeared on the same fight bill with Joe Louis. 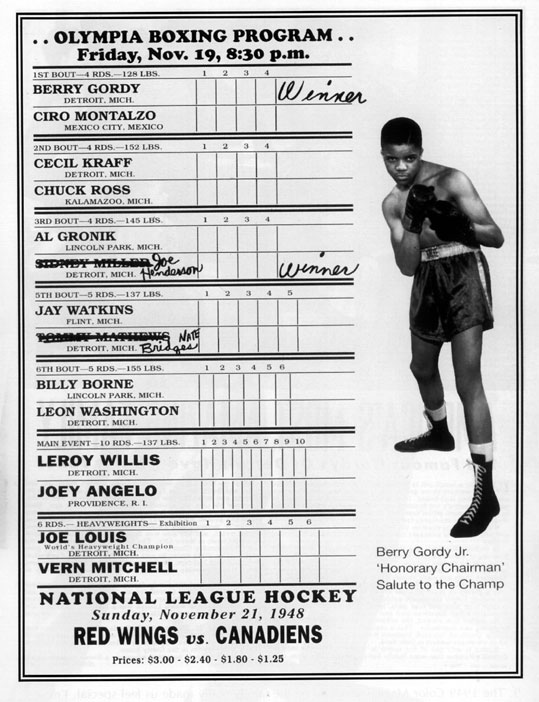 His boxing career was cut short when was drafted to the Army to serve in the Korean War. He served from 1951-1953.

Gordy loved jazz, especially Stan Kenton and Thelonious Monk. After the war, he opened a record store. It failed. He worked for a time at the Ford Motor Company factory upholstering cars on the assembly line, where he used the monotony to compose songs.

It’s worth noting that Gordy had no real formal music training. Despite that, he won a talent contest with his song “Berry’s Boogie” in grade school and sold some of his assembly-line compositions to Decca Records.

He has eight children. The youngest son, Stefan (a.k.a. Redfoo), makes up half of the electronic duo LMFAO. The other half, Skylar (a.k.a. Sky Blu), is Gordy’s grandson.

Though he dropped out of high school and later earned his GED in the Army, Gordy holds honorary degrees from Michigan State University and Occidental College.

Gordy is a vegan.

Mind blown? We thought so.

Want to find out which Motown artist you are? Take this fun quiz from the MOTOWN THE MUSICAL website.

*We’d like to note that Max Schmeling, according to historical notes, did not support the Nazi cause but was more or less swept up as a propaganda tool and later distanced himself from their ideology. On Kristallnacht, he provided sanctuary for two Jewish boys as they ran from the Gestapo.