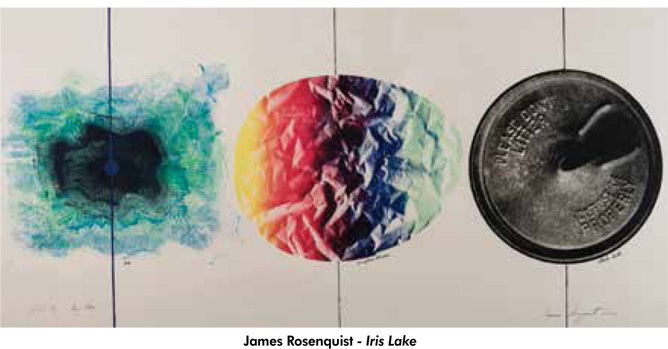 A drawing of a robe. Toddler dresses. Abstract boxes in a row. What are these art works hanging unceremoniously on the walls of Morsani Mezzanine? Where did they come from? What do you mean some of the greatest visual artists in the world are on display at the Straz Center?

The Tampa Bay area is a land of many secrets.

Our history holds several little-known treasures: the West Tampa cigar workers who rolled the instructions for the first Cuban revolution into the cigar destined for Havana; Woodlawn Cemetery, which features a fairly nondescript section dedicated only to circus folk, and Keith Richards, whose stint at the Jack Tar Harrison Hotel in Clearwater churned out the guitar lick to “Satisfaction.”

Perhaps one of the most enduring and prolific gems in Tampa’s atlas of uniqueness is the University of South Florida’s Graphicstudio, an experiment in art and education started by artist and professor Dr. Don Saff in 1968 that goes strong right now, even as you read this. 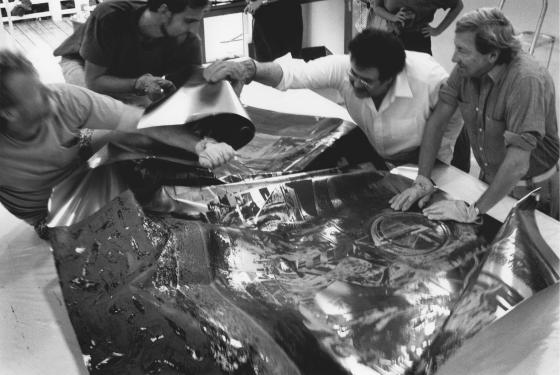 USF Graphicstudio has provided, over the last several decades, a refuge and workspace for some of the most famous, most promising, most daring visual artists to push the evocative, provocative printmaking form. Graphicstudio holds a well-deserved revered status in the art world as a studio at the forefront of international fine art publishing. One of the first artists to work with them was none other than the innovative genius Robert Rauschenberg.

Although The Stones were making headlines in the ‘60s, the boundless eruption of experimental art flourishing in the United States had a home with a group of artists in New York inventing what would be known as Pop Art. Its purveyors – Andy Warhol, Roy Lichtenstein, James Rosenquist and Claes Oldenburg – pole-vaulted into the vaunted halls of fame, fashion, fortune (for some) and made art focusing on popular culture a “thing,” a “happening.” Soup cans transformed to colorful social commentary, collages aping advertising slicks erased boundaries between high and low art, and these artists purposefully muddied the waters around concerns with the interbreeding of politics and mass media, consumerism and community integrity. These artists built the complex platform of cultural questioning that each of us stands on today, and two of these Pop Art all-stars – Lichtenstein and Rosenquist – worked in Graphicstudio.

But before them came Rauschenberg, whose style, labeled Neo-Dada, built the scaffolding for the later work of the Pop Art movement. Rauschenberg is a legend. There’s no other way to put it. He was the one who reconsidered and reconfigured what constituted artistic materials. He put found objects on painted canvases and threw the distinction between sculpture and painting into a tailspin. Rauschenberg was the guy whose White Paintings – canvases covered in uniform strokes with nothing but white house paint – totally confounded the definition of art, making some people really angry and awakened others to a canvas’s possibility for the artistry in shadows or as a backdrop to the art of life. Rauschenberg’s audacity made people question their fundamental assumptions, which made him both loved and loathed, as most great artists are.

Contemporaries admired him, art historians uphold him as one of the most influential American artists of all time and critics continue to debate interpretations of his kitsch-meets-classical work style that upended the boundaries of what it means to make art. Rauschenberg spent years, from 1972-1987, in and out of Graphicstudio, an effort that resulted in 60 editions of prints that experimented with form and technique. Rauschenberg, with the dedication of USF faculty, staff and students, tested his ideas in photo transfer, cyanotype, sepia prints, printing on cloth and ceramics, new material sculptures and a hundred-foot-long photograph during his tenure with Graphicstudio. His works Made in Tampa Two, Made in Tampa Eleven and Made in Tampa Twelve now hang in the easily accessible pop-up gallery of the Morsani Mezzanine. 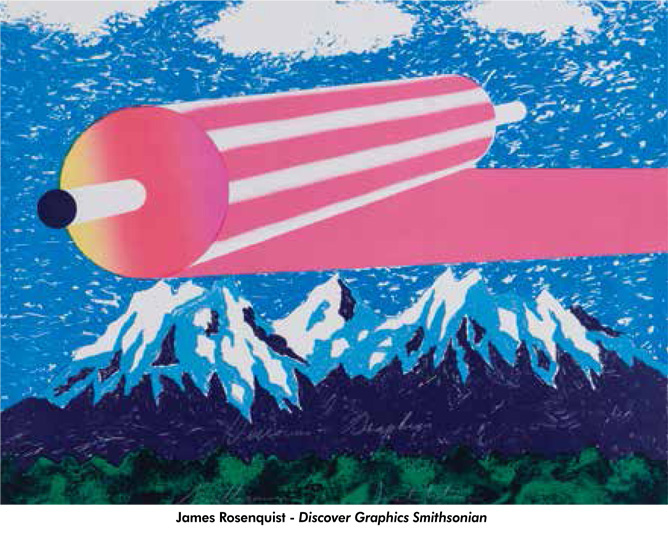 Rauschenberg’s Pop Art contemporary, Rosenquist, noted for his deft and original use of juxtaposition, also has two works from his time with Graphicstudio on display in Morsani: Iris Lake and Discover Graphics Smithsonian. After noticing the Rauschenbergs and the Rosenquists, a leisurely stroll across the Mezzanine reveals the art placards carry one gigantic name after another:

• There are four Untitled works from the master maverick of the Pop Art era, Nicholas Krushenick, whose ultra-bold simplistic color blocks lined with black traces conjure an almost Simpsons-esque aesthetic – only 25 years before Matt Groening became a maverick in his own right. It’s worth noting that during this artistic time period, when almost everyone could be categorized somewhere from Op Art to Pop Art to post-Abstract Expressionism, Krushenick is the only one who defies category. He belongs everywhere and nowhere, which is an admirable feat among the wild bunch of enfants terribles cranking out art in the ‘60’s and ‘70’s. 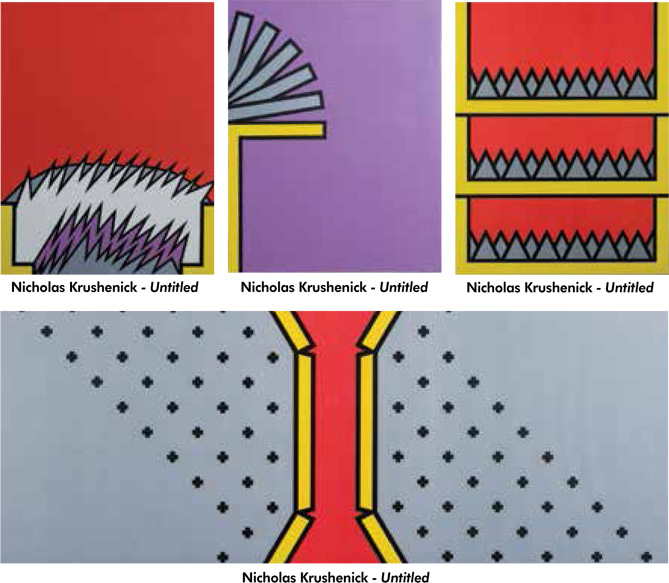 • Chuck Close, whose John I and John II appear near the staircase, is one of the last living giants of the age. His singular, mosaic-style of painting meticulous portraits from a grid, often using each 1×1 square as a minute canvas as part of the whole canvas, reinvented the art of portraiture. 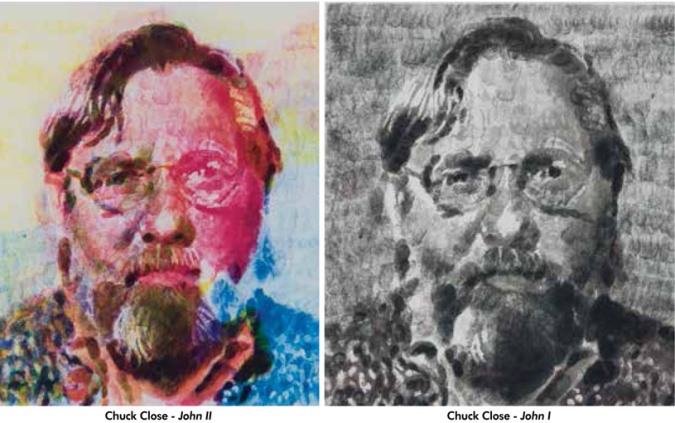 • Miriam Schapiro, the printmaking revolutionary who invented “femmage,” a collage-like style that must include at least seven of fourteen distinct criteria including scraps, sewing, patterns, photographs and a woman-life context, is represented by one of her most enduring works, Children of Paradise, created during her time at Graphicstudio from 1983-1984. 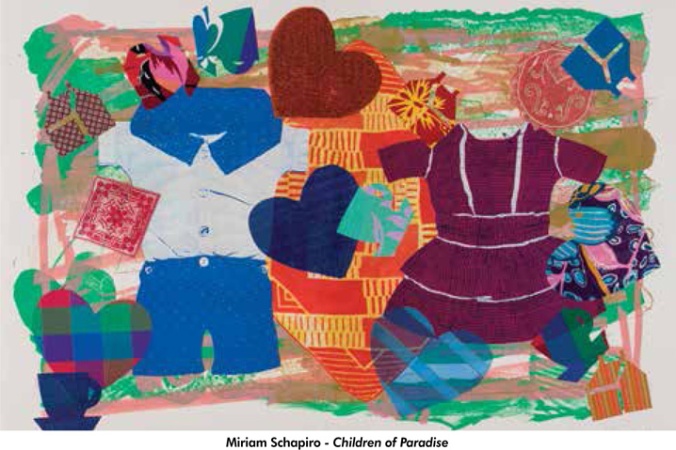 • Jim Dine, Nancy Graves, Robert Stackhouse and the founder of Graphicstudio himself, Don Saff, all have work on the wall in Morsani mezzanine. 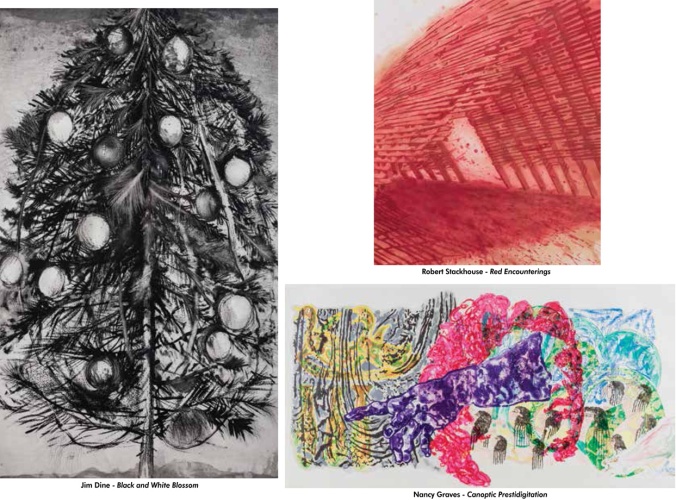 That a collection so impressive, so unique hangs rather humbly in the Morsani Mezzanine raises a very important question: how did they get there? The answer lies with Jay and Ann McKeel Ross. Ann Ross, who moved to Tampa around the time that Rauschenberg was collaborating as set designer with the Paul Taylor Dance Company on Taylor’s 1957 The Tower, graduated from USF. Ann and her husband Jay loved Tampa, loved this area – and they loved art and culture. In 1968, they helped Saff start Graphicstudio, leveraging their relationships to create a pool of supporters to start a subscription program to help fund the artist residency. The subscribers, now called Research Partners, make an annual contribution to support the research mission. In return, they have opportunities to purchase work from Graphicstudio artists for a special price. (Note: anyone can buy full price Graphicstudio prints and sculptures from the studio’s website.)

A Straz Center trustee, Ann – along with her husband Jay – has been a long time donor to The Straz. She loaned these pieces of her personal collection for community enjoyment and appreciation of the fine work happening at Graphicstudio, which is now recognized as the nation’s leading university-based art research workshop. 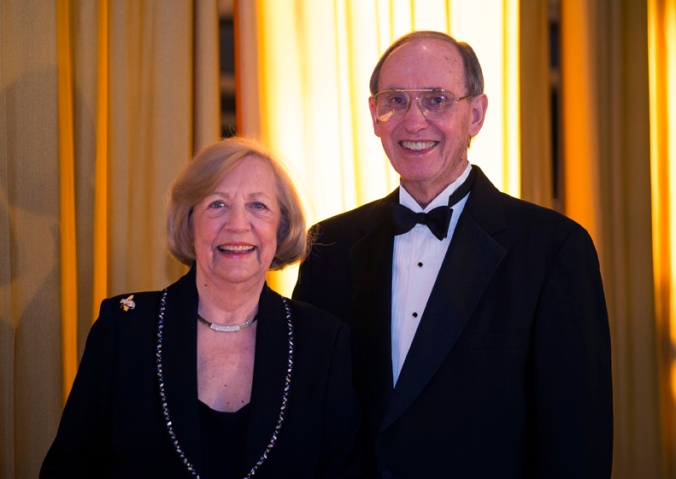 “Ann and Jay are the only collectors that have been members of the subscription program since its inception and therefore have a complete collection of prints and sculptures produced for our Research Partners over the last 50 years,” says Margaret Miller, the director of Graphicstudio. “They have been generous in loaning works from their collection. How fortunate we are to have Ann and Jay in our community. They continue to demonstrate their commitment to advancing art and culture in this region.”

We are very proud and honored to be able to exhibit such a high caliber of work in an open community space like the Morsani Mezzanine, and we encourage you, on your next visit to The Straz, to come early and spend some time with the pieces from Ann and Jay’s collection. If you would like to get involved with Graphicstudio, check out their website: graphicstudio.usf.edu.