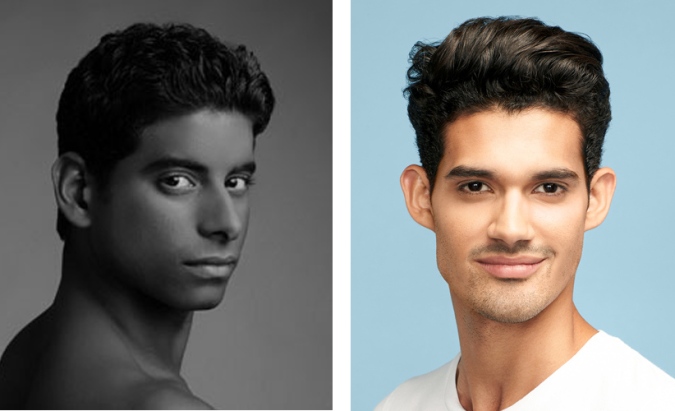 But what about the man in tights executing the unbelievable sequence of leaps and mid-air turns? That’s her Cavalier—in the case of Nutcracker, the name of the role, but the word “cavalier” also refers to a ballerina’s male partner. His job is primarily to show her off and secondarily to wow audiences with a small but virtuosic solo, which is the case for Sugar Plum’s Cavalier.

NGB’s artistic director and former principal with New York City Ballet Philip Neal called in two friends who are rather well-known in the sphere of cavaliers—male dancers with the grace, chops and personality to match the sublime, extraordinary talents of Mearns and Delgado.

Often partnered for NYCB, Amar Ramasar and Sara Mearns perform together for Nutcracker on Friday and Saturday night.

Watch them in an episode of People magazine’s short series American Doers: http://people.com/human-interest/amar-ramasars-journey-from-the-bronx-to-center-stage-at-lincoln-center/

Ramasar, a Bronx kid who saw a videotaped version of Balanchine’s Agon and decided on the spot to be a ballet dancer, hid his training at School of American Ballet, the school founded by Balanchine and Lincoln Kirstein, from his neighborhood friends. Ramasar started late, at 12 years old, and found himself learning the basic steps in classes with five- and six-year-olds. Determined and on fire, Ramasar advanced quickly to graduate on time with his peer group. In 2001, NYCB invited him to join the company. Ramasar was cast as the Cavalier that year in their Balanchine Nutcracker, a must-do of the New York holiday season. He’s been a principal dancer, the highest rank, since 2009.

Amar will play Jigger in the upcoming Broadway revival of Carousel and is also set to appear in the new dance film Meta. (Photo: Paul Kolnik)

Amar, and other NYCB dancers, showed off their moves in a recent campaign for Cole Haan. Do you recognize any other dancer faces in the GIF above?

On the Thursday night performance of NGB’s Nutcracker, principal dancer for Miami City Ballet, Renan Cerdeiro, performs Cavalier with Patricia Delgado. Dancers from MCB tend to talk about what a family they have with the company, and you can see here that Renan and Patricia are close on and offstage:

Renan and Patricia Delgado dancing together on stage (L) and off stage (R). (Photos from Instagram: @renancerdeiro)

Renan, born in Brazil, joined MCB as a teenager, landing solo rank at 18 years old. One of the first Brazilian dancers in MCB (the other was his lifelong friend Nathalia Arja), Renan instantly became known in the company as the dancer who has everything: looks, height, technical beauty and flawless musicality. Plus, he loves Broadway musicals and Disney movies, so he may be a perfect person.

When asked about his turn as Cavalier, Renan told us, “I can’t wait to share the stage with the talented students of Next Generation Ballet for their dazzling Nutcracker. The Nutcracker is a holiday tradition for a lot of families, and it always feels special to share this magical ballet with audiences year after year. It is also very exciting for me to be reunited with the exceptional Phillip Neal, having worked with him in the past at Miami City Ballet. It is a treat to have his guidance again.”

Renan and his cat, because we all love cats. (Photo from Instagram: @renancerdeiro)

With Sara Mearns/Amar Ramasar and Patricia Delgado/Renan Cerdeiro appearing in the most-anticipated roles of the holiday season’s ballet tradition, we’re expecting a high demand for tickets to Next Generation Ballet’s Nutcracker. Make sure you get yours here  to see these stars performing with our exceptional pre-professional company directed by NYCB alum Philip Neal.