In the golden age of American ballet, during the times of Agnes deMille and George Balanchine, one woman rose to the top of her field, making and designing dance costumes that combined form, function and artistry to create ballet’s line of couture. However, no one called it that at the time; the garments were still “just” costumes – but history, and the designers who came after, recognized right away that something special happened at the hands of this woman.

Barbara Karinska created fashions in ballet that are as easy to spot as a Chanel suit. Though her name may not precede her designs (there’s no “Karinska tutu” or “Karinska leotard”), once you know what she did, you start seeing her every time you look at classic New York City Ballet dances. 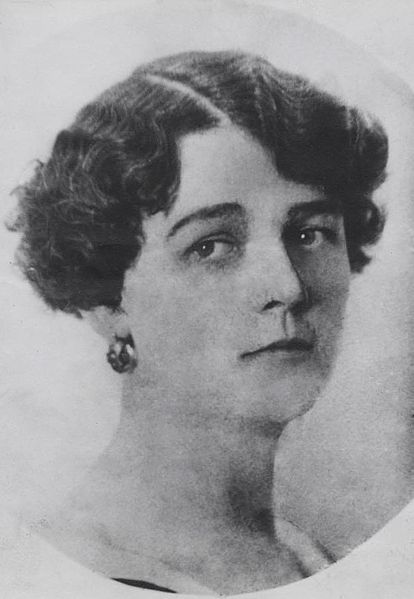 Born in the Ukraine as Varvara Andryevna Zmoudsky in 1886 to upper-class privilege, Karinska learned the skills of that class, including intricate embroidery. She studied law and volunteered in a women’s prison, eventually marrying a newspaper editor. When he died prematurely of typhus, Karinska assumed his post at the paper, a bold and shocking move for a woman at the turn of the century. With her eye on the bubbling political climate that would lead to the Russian Revolution, Karinska closed the paper and set up an embroidery shop in Moscow, meeting her second husband, Nicholas Karinsky, a government official. When the Bolsheviks seized power, Nicholas fled, leaving Karinska and their daughter in Moscow.

Interesting side note: Karinska assumed Nicholas died while on the run. She never knew that he drove a taxi in New York for 20 years. 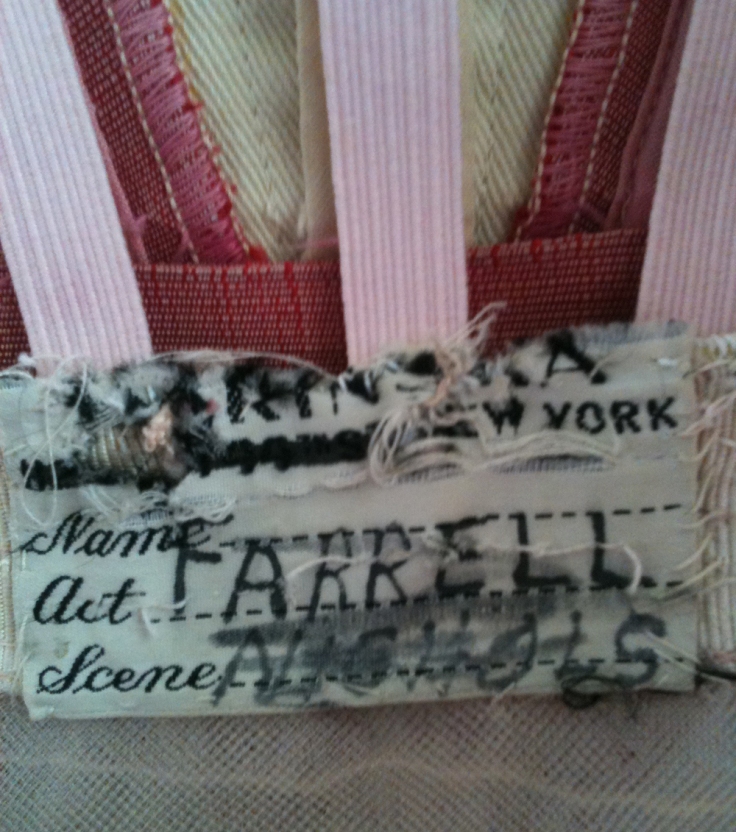 The above photograph of Karinska’s original costume for Balanchine’s Scotch Symphony records volumes of American ballet history in just one image. You can make out “Karinska, New York” on the label and the names of two superstar NYCB ballerinas who donned this costume. Karinska designed the costume for Balanchine muse Maria Tallchief in 1952, and we can see that the final muse of his storied career, Suzanne Farrell, wore this piece when she performed Scotch Symphony. Her successor, Kyra Nichols, stepped into the tutu after Farrell retired. The stark contrast between the frayed label and the almost pristine condition of the costume around it displays the impeccable construction of Karinska’s work. Also, Nichols’ principal partner was our very own Philip Neal, the artistic director of the Patel Conservatory’s Next Generation Ballet.

Eventually, the communists offered Karinska a position in the government as the Commisar of Museums. She accepted the post, convinced the Bolsheviks she needed to further educate herself in Germany, then grabbed her daughter and orphaned nephew and escaped to Belgium. She sewed the last of the family jewels in her daughter’s clothes. The refugees eventually found a life in Paris, with Karinska setting up a small sewing shop. She earned a few cabaret commissions, creating a small reputation for herself.

That reputation was about to go global, however: in 1931, the artistic director of Ballet Russes de Monte Carlo – a gentleman named George Balanchine – commissioned Karinska to make the costumes for his upcoming ballet, Cotillion. She agreed. Thus began a relationship that would dominate the ballet costume landscape until 1983, the year she and Balanchine passed away six months apart.

“I think there was a love thing there,” says Holly Hynes, the award-winning designer who took over the NYCB costume shop two years after Karinska’s death. “I mean, not a romantic relationship. He had plenty of wives and ballerinas, but I think Karinska was head over heels for Mr. B. Balanchine, I think, loved stories about Karinska and loved when there was some conflict in the costume shop. He’d have to go calm her down, pat her hand.”

Hynes, who came on the scene with NYCB during the reign of Jerome Robbins, inherited Karinska’s house – the elite NYCB costume shop full of original costumes, Russians and other assorted people virulently loyal to Barbara Karinska. In her 20s and a native of Des Moines, Iowa, without a single word of Russian in her vocabulary, Hynes had a rather large tutu to fill. In time, she earned the respect of the costume makers and picked up enough Russian to impress a cocktail party,

“I started to totally respect Karinska,” Hynes says. “She was many things. She was an unbelievable ballet costume designer. She went to Hollywood to work with Ingrid Bergman on Joan of Arc and won an Oscar®. She did clothes for burlesque star Gypsy Rose Lee. She was a maker, she was a designer and she also was someone who was so good at interpreting somebody else’s design. Balanchine would bring in artists to collaborate with her on costume designs. One of the artists was Marc Chagall to talk about shapes and colors. Karinska knew how to make what the artist saw.”

With the costume patterns being secrets guarded as closely as Cold War intel to prevent theft, Hynes discovered the dressmakers’ notes impossible to decipher. “The draper [person who keeps the patterns and cuts the cloth] was Russian but understood Polish and could speak English and French beautifully,” says Hynes. “She would use all four languages and a combination of the languages on her notes so that nobody could read her pattern. It was like Morse code.”

Hynes unraveled the mystery of Karinka’s designs the old-fashioned way – she took them apart. “This art form is dying back, so I feel grateful that I got to have that experience to take old Karinskas – stockings, bodices, skirts, tunics or whatever – and examine why patterns were done a certain way, or why she chose to have the workmen do it a certain way. She was a genius, a sculptor of soft fabric.”

For costume design, and ballet costumes in particular, Karinska’s genius lay within her deep understanding of ballet as a whole. “She didn’t just draw or pin stuff on a mannequin,” says Hynes. “She went to the theater. She watched from the house. She stood back and looked at stuff in fittings. She studied how different lighting affected different colors and fabrics. She got a sense of what the audience would see and what the dancers would see looking down at themselves. She was all-encompassing.”

From this perspective, Karinska was able to make and design a few revolutionary changes that are common in ballet today. “She realized dancers have to breathe. The corsets were tight because they were the same as dress corsets. In the ‘30s and ‘40s, the tightest part was over the ribs. She cut fabric on the bias [diagonal] which allows the fabric to give,” says Hynes. This one small, ingenious idea allowed ballerinas to have tight bodices and the ability to take deep breaths. Seems impossible it ever would have been another way, right? Credit Karinska.

“Another Karinska signature was the creation of the ‘powder-puff tutu.’ The skirts have a droop,” Hynes says. Prior to Karinska, classical tutus – ‘pancake’ tutus – shot straight out, encircling the dancer’s waist like a frisbee. If the tutus collided onstage, the skirts tilted upwards, a look both unbecoming and silly. Because Balanchine’s early dancers were thicker with muscles in the thighs and buttocks plus his choreography was so bustling, Karinska developed a new, softer style of tutu that appeared to hug the hips.

Western Symphony, Balanchine’s “cowboy and saloon girl” ballet being performed by Next Generation Ballet this May, showcases this powder-puff tutu design, possibly in its greatest form.

“When I got to New York City Ballet in ’85, the Western Symphony tutus had never been cleaned,” Hynes says. “They were ripe. And they’d been hanging in wardrobe for 10 years, so they were full of dust. I’m looking closely, and I’m thinking we can take the skirts off the bodices and wash them. We did, and oh my god. Those tutus were beautiful. There’s a ruched-up ribbon that goes around the whole ruffle, and it’s very lightweight. Called ribbonzene. Somebody told me there were no renderings for Western Symphony, Karinska hired a person to come in and just ruche up hundreds and hundreds of yards of this ribbon. The workroom people told me there would be four-foot-high piles of ruched-up ribbon. I can’t swear this is true, but in their memories, this person ruched ribbon for a month. Then quit.”

The use of ribbonzene represents another Karinska trademark – the use of unexpected, lightweight materials to keep the dancers decorated but unencumbered. “There’s a trim called horsehair,” says Hynes. “They would use it traditionally in the ballet world inside a headpiece. It takes dye, so you could color it the color of a dancer’s hair then sew it in a hat. You’d pin the horsehair to your hair and not hurt the hat. Karinska wondered what it would look like under the lights and started experimenting. You can twist it and knot it, make bows out of it and all this other fun stuff. It really reads [from the stage], but weighs absolutely nothing.”

Karinska, unlike the other designers before her, changed yoke colors on the costume to give dancers a figure. The yoke, that band around the top part of the skirt, matched the bodice or skirt before Karinska. “She would do a bodice that’s lime green maybe. Then she has a colorful combination of net in the skirt that would be black and gray and magenta and turquoise. Then she would make the yoke a mink brown color. It didn’t match anybody,” Hynes says. “You go, ‘well, doesn’t that break up the line of the dancer?’ But it was like putting a belt on somebody; it immediately gave you this hourglass figure. It was so beautiful and so risk-taking.”

Karinska’s designs come to life when Next Generation Ballet performs their spring concert this weekend. The Western Symphony costumes are on loan from Miami City Ballet, whose costumers re-created Karinska’s original work for Balanchine. Pirates and Cowboys: Le Corsaire & Western Symphony appears in Ferguson Hall May 11 and 12.