Rock School at the Patel Conservatory puts together people who want to be in a rock band. The drummer may be a 65-year-old retiree, the guitarist a seventh-grader, the lead singer a recent transplant working her first professional job at a bank in downtown Tampa. The point is, Rock School is for anyone and everyone who wants to rock. 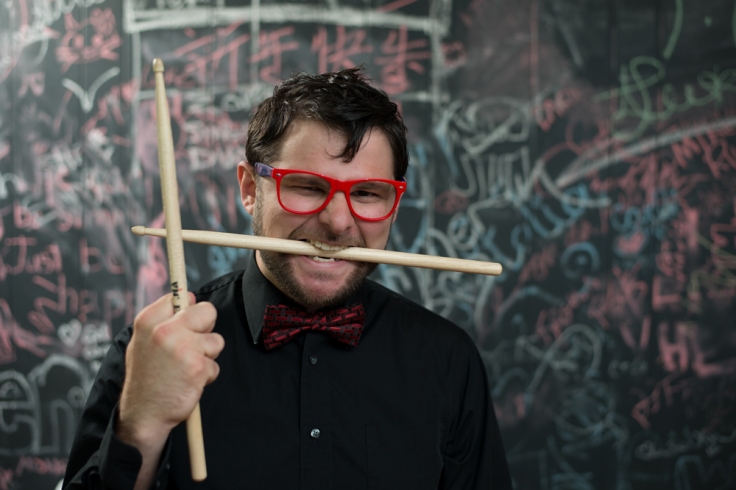 Caught in the Act is thrilled to introduce you to the director, Kevin Sitaras. You can come see Kevin and his Rock School crew shred at the End-of-Summer Music Blowout this Wed., Aug. 7.

Raised by his classically-trained opera singer mother and classic rock drummer dad, Kevin absorbed the best of both worlds, learning Strauss and Slayer, Giacomo Puccini and Getty Lee. He took to music like a duck to water, playing in metal and rock bands, then having dreams fall through like they do on the artist’s road. He walked away from music, but the move didn’t suit him well. Under the strong encouragement of his girlfriend who was tired of living with a musician not playing music, he looked for another band, hitting up the Philadelphia Craigslist until he found a pop-punk band who needed a drummer. Kevin traded a few emails with one of the members, then heard nothing for a year.

“So, a year later, I got another email from him out of nowhere,” Kevin says. “Their drummer wasn’t going to do a tour they were about to go on, so he asked if I’d tour with them. I said, ‘yeah, absolutely.’ I walk into the audition just as their drummer’s walking out. So, it went from ‘you’re going to be the touring drummer to well, it looks like you’re it.’”

The band, Rivers Monroe, had picked up some notice on the Philly circuit, landing a manager of some prominence – in the country music scene (he helped break Taylor Swift). Thus, the hard-drumming, happy anarchists found themselves sponsored by NASCAR, gigging at NASCAR tracks throughout the country. “It was so cool to do because I got to meet race car drivers and be on the track while the race was going on, but that’s a lot of fans to play to who don’t like your kind of music,” Kevin laughs. “In a weird way, we fell in love with it, and we did end up getting some fans from the NASCAR tour and our music on a NASCAR video game.”

“It’s physically demanding,” Kevin says about working the Warped Tour. “You’re outside for 16 hours a day in 100-degree heat. You do that for 10 days straight. You have gear, a merch table. You’re pulling your stuff up and down hills. I lost 15 pounds in two and a half weeks. It makes me think back to when I was a kid and would see guys on the Warped Tour. I’d stick around to talk to them and some of them weren’t that nice, but I get it. I’m not saying that’s okay because when fans came up to me I was always like ‘Thanks so much: I slept three hours last night, have a horrible sunburn, I’ve changed my clothes three times and it’s only four o’clock but thank you so much for coming!’ I’m just saying I got why Warped Tour musicians just wanted to get on the air-conditioned bus after their show.”

After a successful run on the Warped Tour with Rivers Monroe, Kevin returned to his passion for songwriting, going solo and meeting some friends along the way. A good pal moved to St. Petersburg, and Kevin, like any sane person, hates winter. The lure of a singer-songwriter life in the land of sunshine led him to this neck of the woods, and a rather unlikely perfect circumstance brought him to the Patel Conservatory at the Straz Center.

Kevin, who also drives for Uber, picked up a ride one day in 2018 – a certain outgoing raven-haired theater teacher – shortly after he moved to the Tampa Bay area. They struck up a conversation. She mentioned she taught theater for a performing arts school in Tampa; he mentioned he was a musician and had taught at a rock school in Philadelphia. The woman turned out to be the Patel Conservatory’s Sarah Berland. “I told Sarah about working at the rock school in Philly and she was like, ‘oh, yeah, I think we’re looking for a Rock School instructor at The Straz.’ I gave her my email address and said ‘shoot me an email and we’ll talk.’ We went back and forth, she put me in touch with Dr. [Lauren] Murray [head of the music department], and I was hired. I was so happy. The Rock School program here is incredible, so this is a dream opportunity for me.”

Dr. Murray, who gave Kevin full license to shape the program from his scope and expertise, is more than happy to welcome her newest staff member aboard. “Kevin is pleasure to work with and has made a huge impact on our program,” she says. “He’s a terrific teacher, he genuinely cares about making a difference and his rock school students made amazing progress in such a short time. I can’t wait to see what the next year brings.”

To study with Kevin Sitaras and experience the face-melting joy of living to rock, go to patelconservatory.org and search under music classes.