Last Monday, March 9, the Straz Center said goodbye to Opera Tampa’s founding artistic director and one of the most colorful characters to grace our halls and stages. Here, we recount some of our favorite things about Maestro Anton Coppola.

On March 21, 1917, Anton Coppola arrived to Italian-American parents in a country that was not yet a superpower. He grew up in East Harlem with six brothers, a clan of men who made the Coppola name as indelible to America’s artistic history as the Great War was to the history books. The line of Coppola descendants has been nominated 23 times for Academy® Awards, and Anton, our beloved first artistic director of Opera Tampa and international classical music icon, was the oldest living conductor who still composed until his death on March 9, 2020.

Maestro Coppola was taught by one of Puccini’s own students, so he embodied a direct lineage to the great composer. A Puccini master, “he knew everything, had everything in his head,” says Judy Lisi, Straz Center president and CEO and general director of Opera Tampa. “He didn’t need to reference the score—he knew Puccini better than anyone.” Lisi began her professional relationship with Maestro Coppola early in her career at the Shubert Theatre in New Haven, Conn. Lisi, herself an operaphile, launched an opera company at the Shubert that partnered with Yale’s opera master’s program. There she met Maestro. “We were doing a production with Yale students, so I met Maestro and said ‘why don’t you help me start an opera company?’ He said yes, and that’s how it all started,” Lisi says.

In their eight years in Connecticut, Lisi and Maestro Coppola produced 48 operas together, their creative power ending when she took the helm here. However, it wouldn’t be long before Lisi heard opportunity knock again on the pristine concert hall stage in Morsani Hall.  “When I stood on the stage, I thought ‘oh my gosh, they built an opera house.’ There was no formal professional company at The Straz then, and I knew what I wanted to do. It had been ten years since I’d worked with Maestro, but I called him and said I wanted to start an opera company in Tampa, and I couldn’t do it without him.”

Coppola, affectionately known as ‘the little general’ for his tough demands in rehearsal and no-nonsense communication style, barked at her, “Judith! I was waiting for this call!” 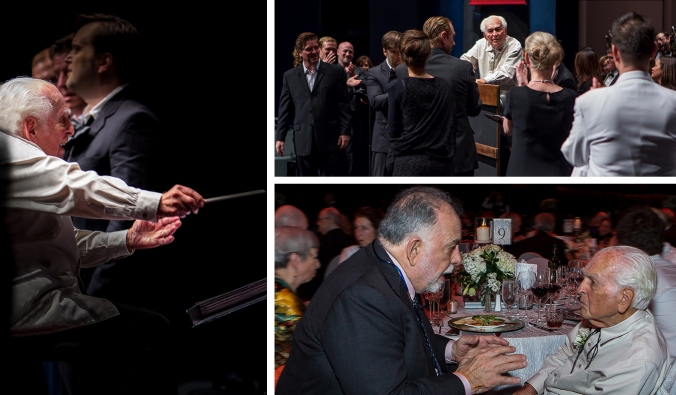 In 1995, Opera Tampa premiered with Puccini’s masterpiece, Madama Butterfly, under Maestro Coppola’s baton and for a packed house at Morsani Hall.

The ensuing years brought triumph, glory, honor and exaltation to the opera season, growing an ardent following for Opera Tampa and an ongoing infatuation with Maestro Coppola’s brilliant gift at culling the best from performers and serving up one dazzling opera production after another. A crown jewel of Coppola’s tenure at The Straz was the world premiere of his heartfelt, contemporary, original opera, Sacco and Vanzetti.

Photos from Sacco and Vanzetti.

“I worked with Maestro on the libretto for Sacco and Vanzetti,” says LeeAnn Douglas, the senior director of digital marketing at The Straz. “He was in NYC and I was here. He would give me corrections over the phone. Since it was a new opera, and he was tweaking it and changing it, I spoke to him often. The most challenging part was he talked fast … real fast. I had a hard time keeping up with him. But he was always patient and kind and humorous. He was a funny, dynamic man. Plus, it was exciting to get to assist with a new work so close to an artist of his caliber.”

Coppola’s opera, an examination of humanity and a closer look at themes of justice based on the famous 1927 Sacco and Vanzetti murder trial, opened to rave reviews in 2001. “I told him we would do the opera, and we did,” Lisi says. “It was a huge hit. It got great reviews. To this day, I remain very, very proud of Maestro’s opera and of the fact that the Straz Center produced it from scratch.”

An irrepressible spirit, Maestro returned to The Straz in February 2019 to conduct his last full-length original score, Lady Swanwhite, the second production of last opera season.

Maestro Coppola in rehearsal for the premiere of Lady Swanwhite.

“Two of the most remarkable things about Coppola were his absolute command of the entire room even with his small stature and the fact that he barely looked down at the scores he was conducting from because he had every note and every word memorized,” says Opera Tampa’s Artistic Administrator Melissa Misener. “It was uncanny—he knew every flute entrance to every chorus line of text. He knew the music better than anyone I’ve ever seen. The most remarkable thing, however, was his health and longevity. Just last year at age 102, he was insisting we work 12-hour days with lunch and dinner breaks. For breaks, he walked from the Straz Center to the Residence Inn across Ashley Boulevard to go eat. So, by my count, the man walked the distance six times a day! For Lady Swanwhite¸ we were all so tired the second night at the end of rehearsal when he said, ‘I’m not ready to stop rehearsing.’ Everyone was stunned, but no one said a word. We all just kept going. The man just would not quit.”

“Maestro was so full of life,” Lisi says, “so full of a passion for music that anyone around him got excited about opera. Maestro was one of the greatest transmitters of the emotion locked inside every single note. With Maestro, you didn’t just hear the music, you felt it. His life inspired me and so many of us at The Straz. We loved him,” says Lisi. “He allowed the music to whisk him away to another world, and he took everyone along with him. We were very fortunate to have had someone with that kind of gift, that kind of genius, steering our opera company.”